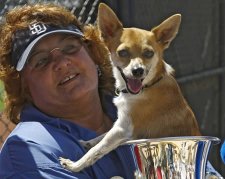 Proving he is still small and mighty at the same time, Tiger of Bakersfield, California, reclaimed the title of America's fastest Chihuahua Sunday, coming in first over 14 other tiny racers at the fourth annual PETCO Unleashed National Chihuahua Race finals.

The 4-year-old pooch, who also won the title in 2006, passed up the entire bunch of the nation’s fastest Chihuahuas – including the popular 2007 winner, Maddy of New York City – covering the 35-foot-long (1/18th furlong) track in just 1.9 seconds. All 15 finalists raced their little hearts out in front of thousands of cheering baseball fans at PETCO Park in San Diego between innings of the San Diego Padres-Colorado Rockies game. Tiger is also an avid competitor in a dog sport called flyball.

"It’s absolutely wonderful to have him win again – I feel like we have redeemed ourselves after losing last year," said proud pet parent Cathy Smith.

PETCO and race presenting sponsor Royal Canin host the annual event to celebrate one of America’s favorite breeds of dog, and to encourage all animal enthusiasts to consider adoption as a first option when adding a pet to their family.