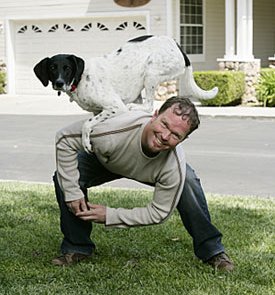 The nation is waiting with anticipation for CBS's new primetime show, which will see twelve teams of dogs with their owners compete against each other for a $250,000 cash prize and the title of Greatest American Dog.

The teams will live together and compete against each other in challenges that put the owners’ ability to train their dogs to the test. Each week, the judges will eliminate one dog and their owner. The cast of dogs includes a Bulldog that skateboards and snowboards; a Border Collie who plays the piano; and a horse-riding Jack Russell Terrier.?

Victoria Stilwell is one of the worlds most recognized and respected dog trainers. Seen in over 30 countries, she is best known as the host of the television series, "It’s Me or the Dog," where she shares her insight and passion for positive, reward-based dog training.

Allan Reznik is perhaps best known for successfully combining his print and broadcast journalism with his passion for dogs. His career spans from teaching to writing books, scripts and countless articles for magazines, newspapers and public television.

Wendy Diamond and her rescue dog, Lucky, are frequent pet lifestyle contributors to the CBS’ THE EARLY SHOW, "The Today Show," "The View," "Fox News," "CNN" and "Good Morning, America," among many others. She has been featured in numerous publications including Forbes, Time, People, The New Yorker and Vogue.

Jun 29, 2017 admin Comments Off on Diseases of Older Cats

Jun 29, 2017 admin Comments Off on Primary and Secondary Lines