Spastic cats (CH cats) are sometimes born to females who have suffered Feline Infectious Enteritis (FIE, Feline Panleukopaenia, Feline Distemper) during pregnancy. Cats which have suffered brain damage through an accident may also be uncoordinated so these notes apply. It can also be due to injury, poisoning or simply a random development problem. It is not known to be caused by a pregnant cat receiving a the Enteritis vaccination and is usually only seen in kittens born to feral, stray or unvaccinated cats.

Adult cats have an immune system which can usually can fight off FIE, but in kittens the virus can cross the blood-brain barrier and cause defects in the cerebellum. Unborn kittens at 1 – 4 weeks gestation are usually killed by the infection and the fetus is reabsorbed by the mother or spontaneously aborted. Kittens at about 4-5 weeks gestation may be stillborn and have major defects; if born live they are unlikely to survive. Kittens infected near the end of the pregnancy may be stillborn or may be born with Cerebellar Hypoplasia (spasticity). These timings and the effects depend on the development stage, size, health and strength of the kitten. It also depends on the mother cat’s health, the environment and the amount of virus she was exposed to. There are different strains of the virus and some are may be more damaging to unborn kittens than others.

Affected kittens may not grow as large as unaffected kittens or they may have slower development. The virus affects the cerebellum area of the brain, an area involved in fine motor control. Typical symptoms are ataxia (poor co-ordination), gait abnormalities and perception. Affected cats are wobbly and uncoordinated (variable degrees from wobbly through to unable to walk) and have characteristic head tremors which are evident when they try to focus on something (e.g. a bird). Many also have sight problems, but it is difficult to assess their sight due to their strange posture and gait. It often looks as though their body goes the opposite of what they are telling it to do, or one part goes in one direction while the other tries to head off elsewhere! They adapt to these challenges, but will always be clumsy and may be nervous or unsure of themselves in new situations. Barring any accidents caused by their lack of coordination, their life expectancy doesn’t seem to be affected and given a safe environment, they live as long as unaffected cats and seem little troubled by their condition.

In humans, the problems would be significant disabilities. CH cats don’t worry over their inability to do things in the same way or at the same speed as other cats. Spastic cats can do everything other cats do and are equally independent – they climb fences, play and performs daredevil feats, though they can be alarming to watch, especially as they teeter along a fence. Occasionally they slip, catch hold with their claws and haul themselves back up again; make sure there are soft plants to cushion any fall! Like disabled humans most won’t want to be overprotected, but in the same way that disabled facilities are made available to humans, some thought needs to be given to toilet facilities, access to favorite spots etc to ensure their well-being.

It is not advisable to give a spastic cat free access to outdoors as their mobility problems, perception problems and possible sight problems makes traffic doubly hazardous to them. If you have an enclosed garden or a cat harness and leash they can have access outdoors. Many people are unaware of the condition and people who see these cats twitching on the path outdoors sometimes try to help the ‘injured cat’, but the cat’s crazy zigzag run confuses most pursuers – they simply don’t end up in the place they appeared to be heading for (one more reason roads pose such a threat, a driver who tires to avoid the cat cannot compensate for the cat ending up in the wrong place). Even birds are caught unawares by this zigzag approach and I know of spastic cats who are reasonable hunters, exploiting this element of surprise. CH cats are extremely independent and owners report that affected cats usually have "sunny personalities", but some allowances still have to be made.

Cushions and rugs under windowsills act as safety nets and crash-mats for an uncoordinated cat. CH cats often lean against walls when at rest and when running, using the wall for stability and guidance. If you provide a ramp up to seats or sills, make sure it is wide since such cats rarely walk in straight lines, carpet it for extra grip and make sure there is some form of crash-mat in case the cat does fall. It may be a good idea to leave such cats with a full complement of claws since they need the extra grip to compensate for limb tremors. These should be clipped regularly so they don’t accidentally snag in furnishings.

The litter tray needs to be untippable and high-sided apart from the entrance. Puss may need to lean against a side while using it. Even so, you need newspaper around it and must be prepared for some accidents as they don’t always position themselves correctly. You may need to clean under the tail more frequently as the cat may be unable to co-ordinate itself well enough to stay in a squatting position while using the tray, or it may stagger and tread in the faeces. Spastic cats are also messy eaters, placing both front paws in the food to prop their head up while eating. If they twitch, some of the food goes flying so feed it in an easily cleaned area and use an untippable water bowl!

Despite what would seem to be insurmountable problems to humans, CH cats enjoy a good quality of life, but need you to watch out for their inevitable accidents. When they fall, they often go floppy and relatively short falls (coffee table etc) will damage their dignity rather than their body. One owner of a spastic cat told me "let him pick himself up first, don’t compound the indignity by picking him up unless it is obvious that he needs help or is injured – and remember – cats bounce!" 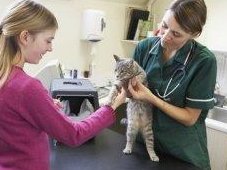 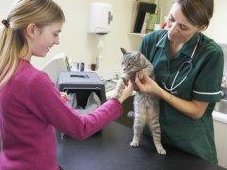