Spaying saves a female’s life, since once she goes into heat she will need to be bred or she will almost certainly die of anemia. However, many people disagree with the common practice of performing the surgery at a very early age, and prefer to wait until the ferret is at least six months old and has reached nearly full size. It should be done before the first time the ferret would go into heat, but apart from that there’s no rush.

A female can be spayed even after she goes into heat, but if she’s been in heat for a month or more, your vet should do a blood test before the surgery. Females can be brought out of heat without becoming pregnant with a hormone injection or by breeding with a vasectomized male, either of which will lead to a false pregnancy which will last long enough to let her be spayed. Neither one is a good long-term solution, though. Breeding ferrets is difficult and time-consuming. 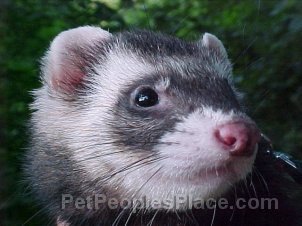 Before even thinking about breeding, you should have owned ferrets for some years, be a member of a ferret organization, and find out as much about it as you can. The actual mating is rather violent, and jills tend to have problems giving birth, producing milk, and so forth. If you’re serious about breeding, talk to someone who has first. You’ll need to have more than one whole male available (in case your female goes into heat when your male isn’t) and more than one breeding female available (in case you need a foster mom because your jill has milk problems) – and be prepared to lose some or all of the kits and perhaps the mom too.

Many people feel that descenting accomplishes no purpose; that is, that neutered ferrets who aren’t spraying smell the same whether or not they’ve been descented. Note that, like a skunk, a ferret will use its scent if it’s greatly distressed or feeling amorous, but ferrets can’t spray their scent as effectively as a skunk, it doesn’t smell as bad, and it dissipates in just a few seconds. How often a ferret sprays and how bad it smells depend on the individual ferret, and different people have different tolerances for the scent, so if given the option you may want to wait and see if you think descenting is necessary in your particular case. Most pet stores sell neutered and descented kits.

Many breeders sell kits which have been neutered but not descented. Ferrets have nails like dogs, not retractable claws like cats, and declawing them is more difficult that it is for a cat. I have only ever heard of a handful of declawed ferrets; most of them are doing well, but a few had long-term problems from the surgery. Many people feel very strongly that ferrets should never be declawed, and nearly everyone agrees that declawing should be done only as a last resort, when non-surgical solutions to the problems have failed. Still, a few people support declawing, and in the end, it’s a decision you and your vet will have to make for yourselves.