Often all is well in 3-14 days but sometimes peace is not achieved for 3, 5, or even 7 months. Ferrets that have been away from other ferrets for two years or more tend to take longer to adapt. Keep in mind that your final goal is well worth the work and that having two or more ferrets that have each other to love and play with is the greatest joy you – and they – may ever know!

It’s often easier to introduce a new ferret when the others are still fairly new themselves. A ferret who’s used to being an "only ferret" or a group which has been together for several years may resist the newcomer more strongly. It’s also sometimes easier to introduce two at once, to divide everyone’s attention. Many techniques can be used to ease the transition. No one technique works on all ferrets; a combination of them has the best chance of success. Reassure all ferrets often that everything is OK and they are loved. Most important, make sure the newcomer is disease-free and current on vaccinations before any interaction. You may choose to quarantine the newcomer for one or more weeks. A pair often blends into the existing group where a single may have more problems. A kit newcomer can be a plus but requires more precautions. 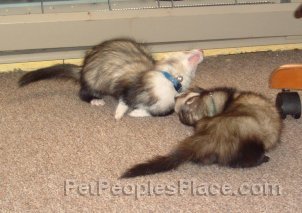 Since a kit is tiny, if the established ferret is too rough you may need to cage it separately until it grows larger. A kit that is constantly attacked and dragged around by an aggressive ferret may be seriously injured or become so traumatized as to want nothing to do with other ferrets. Make sure the first introduction takes place in a completely neutral area – not just an unused room in your home, but preferably in someone else’s home or someplace else neither ferret has ever been near. It also helps if other ferrets and distractions are there. One other ferret may be seen as an enemy whereas a group is seen as a party! If an immediate introduction feels uncomfortable to you, keep the newcomer in a separate cage near your current ferret’s cage. Have supervised visits often, and let one ferret out at a time for playtime.

The new guy can then get used to the new surroundings and the established ferret will not feel he’s being punished. Switch their bedding back and forth so they become accustomed to each other’s scent. Give the ferrets baths immediately so they smell the same. Bathing them together may help since misery loves company. You might also put vanilla extract on their noses to confuse their smelling and bitter apple on their necks to discourage biting. Start out by holding the ferrets and letting them sniff each other. Gradually, as you feel comfortable with it, give them more freedom to interact with each other. Expect fighting, but always supervise in case it becomes violent.

When you pull wrestling ferrets apart, if the loser goes back for more they are probably just playing rough. A ferret that bites with a darting motion and shakes his opponent roughly or tears at his skin is being more aggressive than normal dominance struggles. If you leave them alone, one ferret can end up with a neck covered in scabs, infected or worse. Usually when a ferret is being hurt he’ll get very loud vocally, often screaming, but this is not always the case, so constant supervision is a must. (Some ferrets scream when they’re not being hurt, or even when they’re the ones attacking, so don’t assume the loud one is the one being picked on.) When undue aggression occurs, immediately scruff the attacker with your hand, or better yet with your mouth, and gently shake him. Scold him loudly, right up close. Afterward put the attacker in his cage for a time-out. Don’t hit him, even tapping his nose, since that will only make him afraid of you, and he’s already under stress.

If scruffing, scolding, and cage time don’t work, he probably needs a little more time to adjust. Also be sure to find the newcomer and reassure him he is safe and loved. If the ferrets groom each other, often around the ears or neck, it’s a sign of acceptance, but do not leave them unsupervised until you’re positive there is peaceful integration. Unfortunately in very rare instances peace is never achieved and a new home may need to be found for the newcomer. Of course you’ll want to be sure the new home will be understanding and loving, but also make sure the prospective new owner is aware of the problems the ferret has had getting along with yours, since even if he wasn’t the aggressive one it will affect his relations with other ferrets. You don’t want him to end up being passed from house to house, never able to fit in.

Sometimes, even after an established ferret and a newcomer have stopped fighting, the first ferret may start to act depressed, especially if he’s used to being an "only ferret". Ferret psychology is still an undeveloped field, but most people interpret this glumness as jealousy or resentment of the new ferret. Be sure to pay plenty of attention to all your pets, and give the depressed ferret a couple of months to adapt. Chances are he’ll come to see the new ferret as a playmate instead of an interloper. In extreme cases, you may need to resign yourself to only having one ferret, and find a good home for the other(s).

Jun 29, 2017 admin Comments Off on Guide to Ferret Food Supplements

Jun 29, 2017 admin Comments Off on Training Your Ferret