Horse shows are a big ego thing. If you win you feel pretty positive about yourself and your horse. You feel like you must be doing something right and you especially like the part that someone else-the judge-thinks so, too. (Boy, that judge sure saw things right today.) If you lose, your self esteem is damaged. You wonder if you’re ever going to amount to anything or why your horse is so dumb. (Boy, that judge was blind today.)

But if you stand back a ways and look at horse shows from a different perspective, you can see they’re only games that people like to play with their horses. A bunch of people get together, make up some rules, and then play that game until some one of them starts to win the game all the time. So then somebody else decides they need to change the rules so more people or different people can win and they start all over again with a new set of rules. And so on.

Whether a horse or rider wins or loses at a horse show doesn’t necessarily tell you anything about how well the horse is trained or the rider rides. All that can tell you is how well the horse’s handler or rider knows the rules of the game-or how to work around them or how to fool a judge -and whether that horse was able to play by those rules on a given day.

A lot of people make winning at a horse show their goal. They find out the rules and then they train the horse to perform whatever specific tasks the rules require. Instead , they should make it their goal to have a horse that has a solid basic understanding of and response to methodically applied, horse-logical corridors of aid pressures. That kind of understanding can be channeled into any game the rider wants to play.

In a good training system, every new thing the horse learns should build horse-logically on what the horse already knows. The horse never has to unlearn something it has learned in order to make progress. When people use horse show rules as the basis of the things they train their horse to do, they can wind up with a "trick” horse. They’ve taught him to do a certain thing a certain way because that’s what judges look for. Then some group of somebodies decides to change the rules a little bit one day and now the horse has to stop doing what he used to do before you can teach him the new tricks he’s supposed to know.

Back when I was judging a lot, I used the back up as one way of figuring out who was really in control of their horses and who was just sitting there on a horse that was programmed to do tricks. The trick horses were all programmed to take so many steps back and stop and then go forward and they knew the routine. Their riders couldn’t modify the routine the horse knew or the whole thing would start to fall apart. The really good riders could get their horses to back up smoothly and quietly one step at a time in any sequence I asked them for.

When people go to horse shows and win, they love the game. When they lose, then they gripe about judges or politics or people weaseling ways around the letter of the rules, or some other excuse for why they weren’t the one with the blue or the tricolor ribbons at the end of the day. Horse shows can be a negative experience. In fact, some judges judge them that way. They get a big class and place it by process of elimination. Instead of looking for the horses and riders that are doing everything right, they watch for mistakes and eliminate horses one after another until just a few are left. If you go to a horse show with winning as the only goal that will make you feel good about the day, the odds are that you are going to go home feeling like a loser.

But horse shows can be a positive experience every single time whether you bring home a handful of ribbons or not. Every class gives you an opportunity to play by the rules using the understanding you have developed with your horse about the meaning of corridors of methodically applied pressures. You have the opportunity to shape your horse’s performance stride by stride. No tricks, no just hoping the right thing will happen at the right time. You’ll shape the horse’s performance to fit the rules but if someone changes the rules, you’ll just reshape the performance. Your horse won’t have to unlearn any tricks because he was never programmed for them in the first place. Every class becomes an opportunity to practice.

Good basic training prepares the horse both mentally and physically for whatever game you ultimately want to play. As the horse gets more advanced, he’ll start to specialize in one particular game. But his training is such that if you decided to play a different game with him some day, you wouldn’t have to go back and "unteach” anything he knows. If you make methodical, horse-logical training your goal rather than just winning ribbons, you can have a well trained horse that can play any game you want. 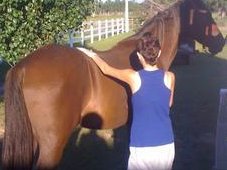