In the beginning, you use arena walls or a fence lines and corners to help you create corridors of pressures using these lines of influence. These corridors of pressures should horse logically allow the horse to move in the direction you want him to move-forward or left or right or not moving at all. You can also use those pressures to a create a shape or feeling such as straight or curving and even a speed such as walk or trot.

For example, to teach the horse to lead, you start alongside a wall or fence line. Stand next to the horse’s shoulder facing forward so that your primary and secondary lines of influence are parallel to the horse’s lines. Have a whip in your outside hand that’s long enough to reach back and touch the horse’s hindquarters without making a big motion. The lead rope is hanging down from the horse’s halter and coming up to your hand. The loose end of the rope is folded in your hand and your thumb is hooked in your jeans pocket so you’re not tempted to tug on the lead.

Your primary line of influence holds the horse on one side. The arena wall holds him on the other. Lean forward enough to clearly show the horse that you are moving your secondary line. At the same time, move your primary line out away from him a little bit to give the feel of an opening and create a pressure to to rear by just touching him on the hindquarters with the whip. The horse will see and feel the opening you’ve created and horse logically move into it.

Don’t use the whip aid too strongly to send the horse forward. A lot of people think it’s OK to do anything to get a horse started because once he’s started then he does things. Your goal always is to create rhythm and relaxation in the horse, never to startle him with a loud pressure.

In the beginning, if he only takes one step, that’s enough. The first lesson you want the horse to learn that he can get away from the pressure by doing in the direction the pressure points, not that you’re bigger and badder and can make him do things. You are teaching him to follow your secondary line when you move it. So let him start and stop if he wants to. When he stops, turn to face his shoulder so that you put your primary line on his secondary line. Do a little scratching and grooming in this position to help him relax.

Use the arena corners to help you teach the horse to stop when you want him to stop. As the two of you approach the corner, he’s going to feel like the wall at the corner is closing in front of him. Just before he walks into that trap, you turn your primary line onto his secondary line so you are facing his shoulder and you start scratching and loving him. Time it so you ask for the stop just before he reaches the corner. Then he figures out how to keep that closing feeling from happening.

To teach the horse to turn his secondary line when you turn yours, move your primary line out away from the horse a little to give the feel of an opening and start turning you shoulders in the direction you want to go just before your primary lines are about to collide with the wall.

Be sure to work the horse both ways of the arena and from both sides. A dominant horse may try to face you and put you on the side he likes. Ignore his suggestion and don’t argue with him. Just start again on the side you want to work. If the horse wants to argue or doesn’t understand, go back to something he knows and start there.

Move your left and right feet to match his strides at first so he starts to understand that matching is the game. Later, you’ll be able to lengthen and shorten your strides and get him to do the same with his. But in the beginning, follow the horse to show him that’s the game. As the horse begins to understand the relationship of your secondary lines, you can accent that relationship to tell him you want him to shorten or lengthen his stride or to trot or to slow down.

Now you’ve got the beginning of an alphabet you can use to teach the horse all kinds of games like longing or getting on a trailer or standing for the farrier. As the horse gets better at understanding, you’ll keep accenting the relationship to teach him more complicated games. Your goal in heeding is to teach the horse a consistent language so whenever your lines of influence and his are lined up a certain way, it always has the same meaning. 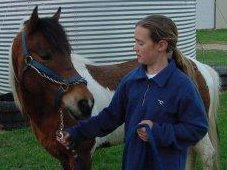