There are times when the command "Drop It" simply does not suffice.After all, who wants to eat a gnawed on, dog-slobbered steak, or anything else that’s been in a dog’s mouth?Teaching your dog to "Leave It" might not only save your dinner, it may save his life. Leave It means don’t touch, and it comes in handy when your dog is thinking about picking up something on the bathroom floor or the sidewalk, rolling in a disgusting bit of detritus at the beach, taking a child’s ice cream cone, or chasing the neighbor’s cat into the street. Teaching the basics of "Leave It" are fairly simple but require two or three short sessions per day, usually for a minimum of two weeks.

Place a small bag of high value treats (small pieces of cooked chicken, freeze-dried liver or sliced hot dog) in your back pocket or on a table behind you.Put a dog biscuit in one hand and the high value treat in the other.Open the hand with the biscuit and let your dog see it. If he tries to take it from your hand, quickly close your fingers around it and say, "leave it" in a normal but firm voice.Open your hand and show him the biscuit again.Repeat several times until he looks at you, or pauses and stares at the biscuit rather than trying to take it, then say, "YES!Good boy!" in a high, happy voice.Immediately give him the high value treat from your other hand.During your next session, change hands.Make it fun.You want him to understand that yummy things happen when he obeys your command.

Once he understands that he should look at you and not lunge for the biscuit, make things a bit harder.Change your location, make him lie down or stand, and begin placing the biscuit in front of him on the floor(make sure you can cover it with your foot, if necessary).Once again, tell him to leave it.As he progresses, use tastier treats and add minor distractions, such as a child walking by or someone throwing his favorite toy, until you can literally put a steak on the floor in front of him and he’ll leave it.

Once he’s gotten the basics, it’s time to apply what he’s learned to real life situations.Using a standard clip collar, take him outside on a leash.Put a tasty treat on the ground and walk towards it.Get close enough so he can smell it, but far enough a way so he can’t get at it.When he notices the treat, tell him to leave it.If he pulls or lunges towards it, say something like "whoops! leave it," and quickly reverse direction.Walk about eight feet then turn and walk back towards the treat.Once again tell him to leave it.The minute his attention shifts towards you rather than the treat, praise him and give him a high value goodie from your pocket.Do not give him the treat on the ground.

As he becomes better at acknowledging your command, begin adding additional distractions and use a longer leash.For example, have a neighbor take their dog for a walk coming from the opposite direction.When your dog pulls towards the other animal, tell him to leave it.If necessary, give a short, sharp tug on the leash and keep him going in the correct direction.When he turns away or ignores the other dog, give lots of praise and a high value treat.

Initially, reward even small successes.As he begins to understand what you want, vary the rewards; sometimes use a treat, other times use only praise.Even when your dog really understands the command, be sure to include it at least three or four times a week so he doesn’t get rusty.Teddy, my nine-year-old Golden Retriever, was swimming after his ball in the ocean when a Sea Lion’s head popped up about 50 feet away.Teddy turned and headed for the Sea Lion, and I told him to leave it.He turned away and swam towards his ball.Again, the Sea Lion’s head appeared, this time about 20 feet away."Teddy, leave it.No toy!Teddy come, now!" I screamed.Fortunately, he followed my commands to a T.If he hadn’t, he probably wouldn’t be here today.His case is extreme, but properly taught, "leave it" can go way beyond saving your dinner. 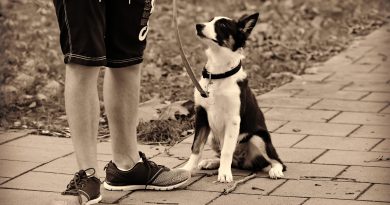