Margaret H. Bonham is the author of The Simple Guide to Getting Active With Your Dog (TFH) and Northern Breeds (Barrons), and as she goes dog sledding with her canine crew. Bonham has four favorite snow games:

Where Did It Go?
Make a very soft snowball – don’t pack the snow tightly – then toss it into the air. In mid-air the soft ball will disintegrate, and that’s the idea. "It’s kind of a dirty trick,” says Bonham. "Well, not really. The dogs love it. They chase and maybe dive for it. Some dogs think it’s really funny, and most people think it’s even funnier. And the dogs always come back for more, so they must be having fun.”

Catch The Ball
In this game you pack the snow tight and lob a snowball like you might a tennis ball. The dog snatches it and it usually falls apart in the dog’s mouth. One of Bonham’s Alaskan Malamute, Haegl, manages to catch these snowballs without breaking them. Then he proudly struts around the backyard with the snowball in his mouth, playing "Keep Away” with the other dogs. So this is a case of one dog creating a game in the snow to play with the other dogs. Eventually the game ends as the snow inevitably begins to melt in his mouth.

Keep Away
This game requires a human partner. Toss the snowball back and forth until either the dog gets it or the snowball falls to the ground. Bonham warns that when you pack the snow for these games, be sure to choose pristine stuff. Particularly in urban areas, snow may have oil, antifreeze (which can be deadly to dogs), just plain dirt, street salt or anything else mixed in. Also, be sure the snow isn’t packed with ice in it; if a dog catches this, it’s not fun. 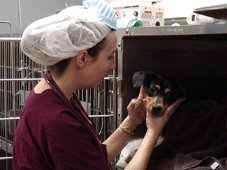 The History and Purpose of 10 Popular Dog Breeds

Nov 15, 2019 KristaLB Comments Off on The History and Purpose of 10 Popular Dog Breeds